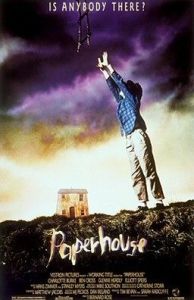 Paperhouse is often cited as a forgotten gem of 80’s British film. If you go searching for it on the internet you’ll often find it pigeonholed into the Horror genre, however this is doing the film a wild disservice as it is so much more than that.

The film tells the story of eleven year old Anna. Confined to bed with glandular fever, Anna discovers that one of her colouring pencils seemingly has the ability to create imagery she can take into her dreams. She draws a house – her perfect house, full of all the things she ever wanted. In the house she finds a boy, Alec, who may also exist in the real world, and forms a strong romantic bond with him. But, as Anna’s fever worsens and her dreams become more erratic, she and Alec have to eventually deal with the nightmares she creates.

Directed by Bernard Rose four years before his more well known film, Candyman, Paperhouse ha a lot of similarities to the more straight up Horror that was portrayed in that Cliver Barker adaptation. Indeed, taking the Clive Barker similarity further there is also a strong stylistic similarity to Barkers own film, Hellraiser, with a strong dreamlike feeling throughout and a haunting synth score (in Paperhouse’s case, it’s an early one from Hans Zimmer). But, thematically, the story is probably closer to the works of Neil Gaiman. The film is closer to being a Fantasy/Drama than a Horror. There is one moment in the middle of the story that could be classified as Horror but it’s certainly incredibly mild.

What there is, is a great deal of subtext. Underneath the fantastical story of a child who can bring dreams to life is an allegory about adolescence. Anna suffers from potentially pubescent mood swings, issues with her absent father (who may or may not have a history of alcoholic abuse) and a general ambivalence that leads to many people initially believing she is faking her illness. There are some powerful themes at work here and they’re played in a way that you genuinely feel for Anna having to cope with both her feelings and actions (at one point in the story she tries to destroy the drawing, leaving the house in a dark, decaying state) and learn adult responsibility.

It really is a shame that Paperhouse isn’t talked about as much as some 80’s British genre films. It really is a fascinating film with some stunning production design. Being labelled a Horror film probably doesn’t help, nor does the 15 rating which is honestly far too strong for a film with no swearing and only one moment of very mild bloodshed – should the film be reissued I would expect it to receive a 12 rating.

Keep an eye out for this one – it’s often shown in the Horror channel in the UK and is well worth  watch.